When it comes to viewing celestial bodies in the sky, a reflector telescope can be a good option.

A reflector telescope utilizes two mirrors instead of lenses. The concave primary mirror is located at the bottom of the telescope. It reflects the inbound light to a focal point, then a second flat mirror set at 45 degrees situated just below the aperture redirects the light creating a focal point toward the eyepiece. There are two main benefits from having this telescope: (1) cheaper than refractor telescope and (2) no fringes in the color of the images formed.

Who Invented the Reflector Telescope?

Sir Isaac Newton was credited as the inventor for the reflecting telescope in 1668. Newton tried various metals and polished it to improve reflecting capabilities.

After building his first functional model, the Royal Society of London was able to see Newton’s demonstration of it. After the successful demonstration, Newton gained membership right away from the said scientific community.

On the other hand, several other people who lived before Newton also made designs and functional models of this reflecting telescope.

A scientist named Nicolo Zucchi was the first one to build a very simple design telescope. This scientist and an Italian named Jesuit attempted to make a reflecting telescope in 1616 but were not successful. Consequently, Nicolo stopped trying and went back to making refracting telescopes.

Meanwhile, two Catholic priests named Marin Mersenne and Bonaventura Cavalieri were the first one to successfully design a reflecting telescope which got the name Mersenne telescope. The design was a combination of primary concave mirrors and a smaller secondary mirror. Aside from that, Leonardo da Vinci also used concave mirrors in studying celestial bodies a century before Newton.

Why Were Reflector Scopes Made

Refracting telescopes were the first thing made to study celestial bodies in the early centuries of research and development. However, refractors have some setbacks such as chromatic aberrations or fringing of colors. To solve this problem, a reflecting telescope was built using mirrors instead of lenses.

Chromatic aberration happens when the lenses are unable to focus all light or color to a similar focal plane. The primary factor of this problem is lens dispersion. As light passes through the lens, it breaks into different wavelengths and travels at various speeds. The result of this problem is a blurred image.

Consequently, mirrors were used in replacement of lenses. Mirrors have the capabilities of reflecting and concentrating light rays to a single focal point. This mechanism is beneficial in creating sharper and accurate images.

When is a Reflector Better over Other Telescopes There are several new models of telescopes available in the market today. Each model has its specific innovation and purpose of using. If one wants to view and observe deep-space-objects (DSO’s), then a reflecting telescope is much preferable.

This telescope is commonly used in a standing position when viewing galaxies and other distant celestial objects. To further understand the significance of this telescope, below are some of its common pros and cons.

In addition, due to advancement in technology, there is a third type of scope which is a hybrid of a reflector and a refractor – the Schmidt and or Makustov Cassegrain telescopes. Unlike the regular reflector, this one has a shorter tube length, which increases its portability aspect. To learn more about Cassegrain’s check out this article.

How Does the Reflector Telescope Work?

As light from the object enters the telescope, it travels down to the bottom and bounces off from the base mirror. After bouncing off, all light meets at the point where the secondary flat mirror is located. Then the flat mirror directs all reflected light rays towards the eyepiece.

Besides, some reflecting telescopes use a convex secondary mirror and a perforated primary or base mirror such as the Cassegrain reflectors. These parabolic mirrors can reflect and concentrate all incident rays to a single focal point.

Another type of mirror used in reflectors is spherical mirrors. These mirrors are easy to produce but have varying focal lengths, which result in a fuzzy image.

Where Would You Use Reflector Telescope Over The Other Style?

If you are studying astronomy and want to see clear and large views for DSO’s or other celestial stuff, then a reflector telescope is ideal. Most people use this scope when viewing from parks or on any flat terrain. 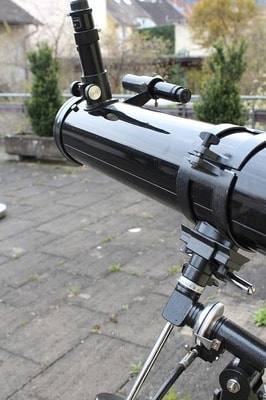 Likewise, reflectors are a great tool in observing celestial bodies near Earth but also excellent in viewing farther objects such as the moons of Saturn and Jupiter, distant galaxies and nebulae.

However, there will be some difficulties if you will be viewing objects right above you. To accomplish this, you need to reposition the angle of your scope to view those objects. This issue is present in refractors as well.

There are several inventions which contribute significantly to the advancement of science, and telescopes are one of them. It allows us to observe and study the heavenly bodies even at very far distances.

There are several kinds of telescopes in the market today, but the two general types are reflectors and refractors. Here, we discussed things about reflectors while we have another article for refractors which you can read here.

In general, reflectors are ideal for observing deep space celestial objects and galaxies due to their high light gathering ability. There several things to admire from having this scope. First, using this scope gives a clearer image of the object – it is more cost-efficient than its counterpart refracting telescope. Second, it is, to the most part, straightforward to use.

Aside from that, there are also things to gripe from a reflector. For instance, before using, you need to check the alignment of its mirrors to get a perfectly good image.  See our article about why the Moon is upside down.

Choosing the right telescope means understanding its features and checking if it meets your requirements.